Travelling and making money on the road, how on earth am I going to do thát??
With that question in mind and tired from a long day studying the regular bull-dong about ‘getting rich quick’ strategies, I collapsed on my bed and closed my eyes. After a while, my mind emptied and I relaxed a bit.. after two whiles, my mind entered the zone of ‘creatiffany’, where all golden dreams are made… Then it hit me! Suddenly It dawned on me… I knew how to became the new king of wealth and abundance! Showers of gifts and goodwill finally would come our way! I laughed out loud and started running wildly crazed around the house in wider and wider circles shouting YES, YES, YES!!.

What really happened was that I had a little funny inspirational moment. And because the image I saw was so funny, I had to explain it to my girlfriend who was inquiring about it. “I saw Cookie Monster playing the guitar somewhere in the streets!  And I,  I was to be IN that Cookie-Monster!” I explained to the best of my abilities.

During my epic life, I’ve met many people, but I guess not many would have associated me with ‘  The CookieMonster’! (-or worse, imagined me making that Cookie monster costume myself) and, of course,  neither had I.

‘Why Not?’  I explained to my Girlfriend. ‘This might actually work! I know how to put a string into a needle so I’ll think it out somehow’.

The next two weeks not much happened, but the plan slowly grew on me.

The fun thing about it was imagining myself walking the streets with the costume, playing the guitar, doing silly walks or just pop up somewhere.

After collecting all the stuff, I started the needlework.

The Head was not that easy as I hoped it would be!
It took me three evenings to find the right construction with the gathered materials. ( in my mind I would have finished the suit already).
The rest of the suit was easier, just good old needlework as a tailor would say. The cutting, measuring, fitting and such did cost allot of time.

The most terrible part of the whole project were the many hairs! my god!  -cutting the fabric immediately resulted in swirling blue hairs. The floor, my clothes and in the end the whole house was covered with blue hairs. A real Cookiemonster-hair-inferno came over us, ‘and all despaired‘.

Because of the large size of the head, I had to adjust the costume. It received an upgrade with shoulder-fillings and the breast got a filling too!
The fact that the costume is a bit too hot to wear with other clothes, was a bit of a disappointment. But after some adjustments to the breathing holes in the neck, the heat was less intense and allowed for normal breathing again.

The final result was not bad at all! 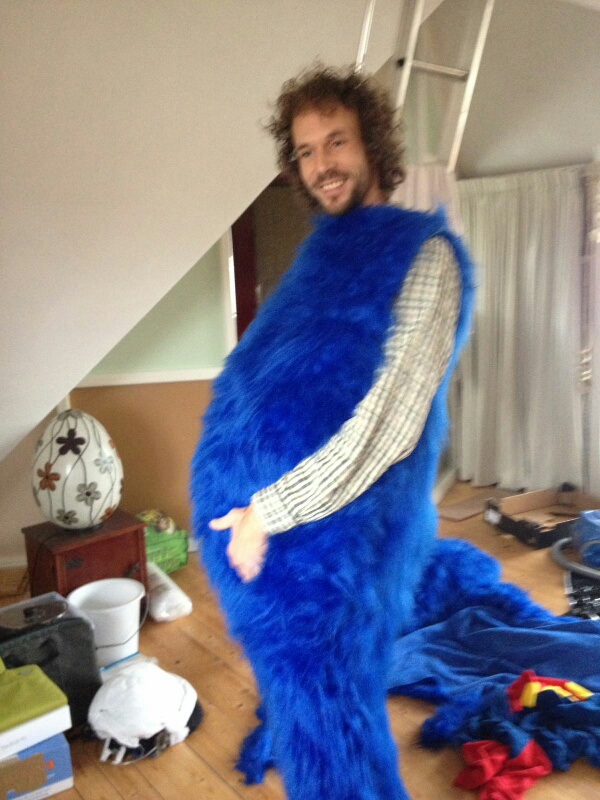 first design of the head 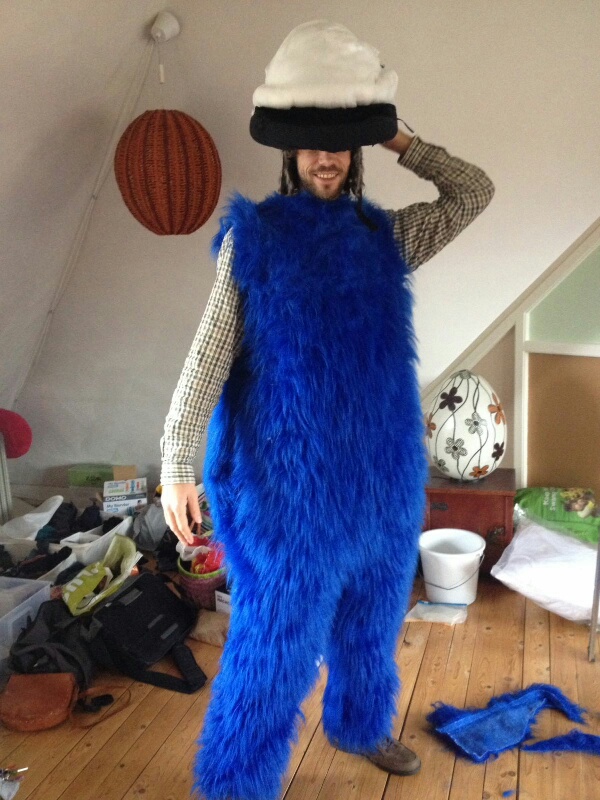 1
yes, its resting on my head using my genius design

what a small head! 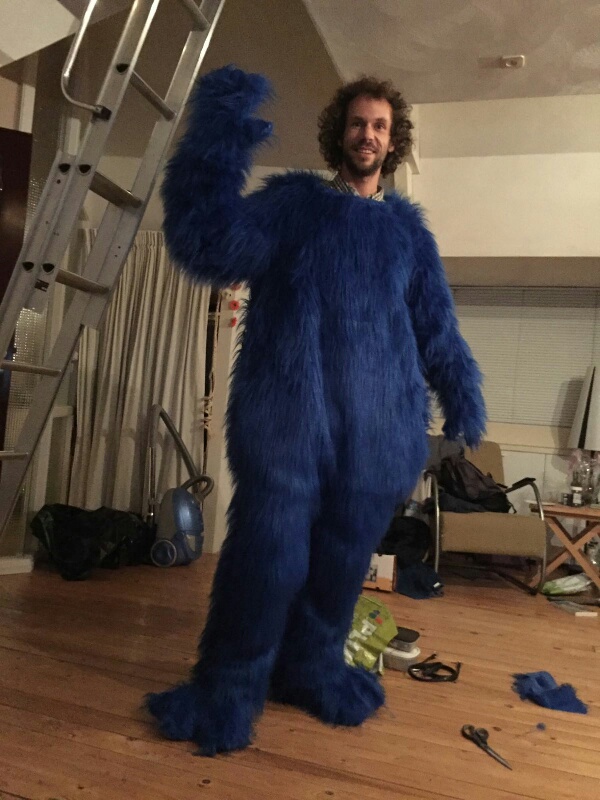 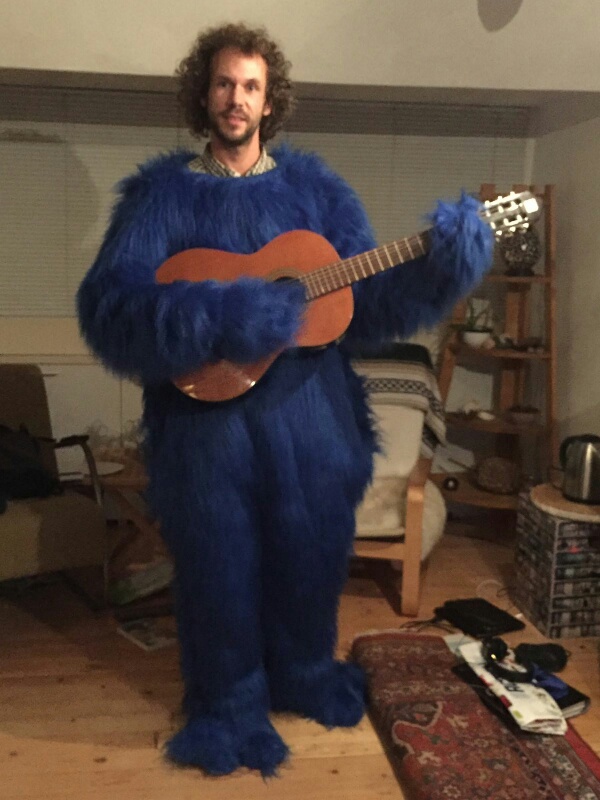 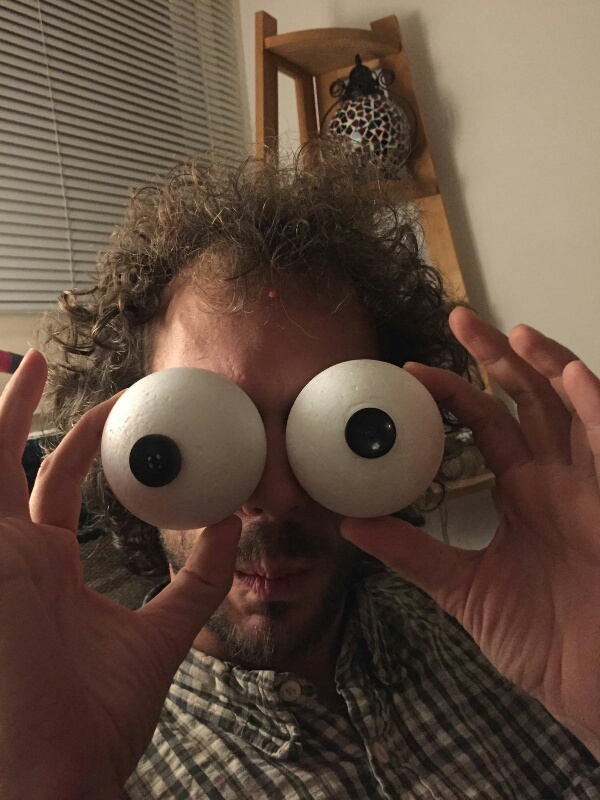 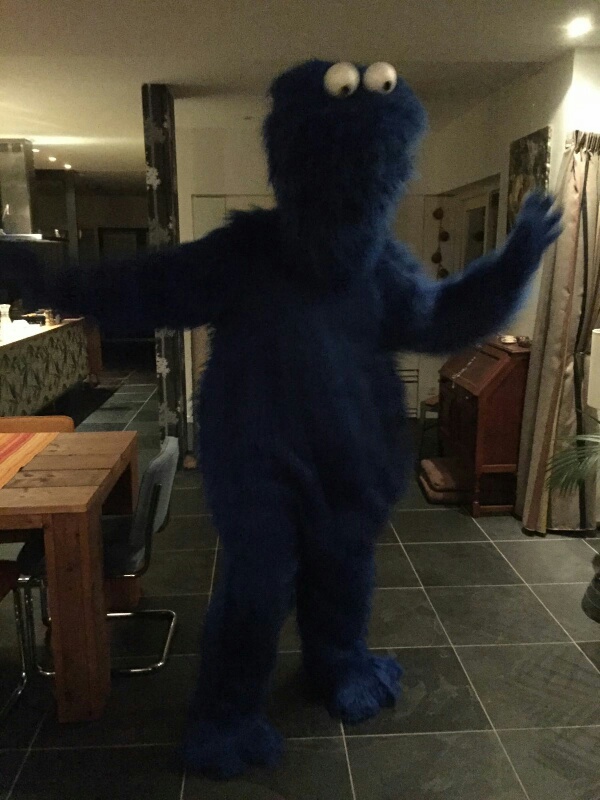 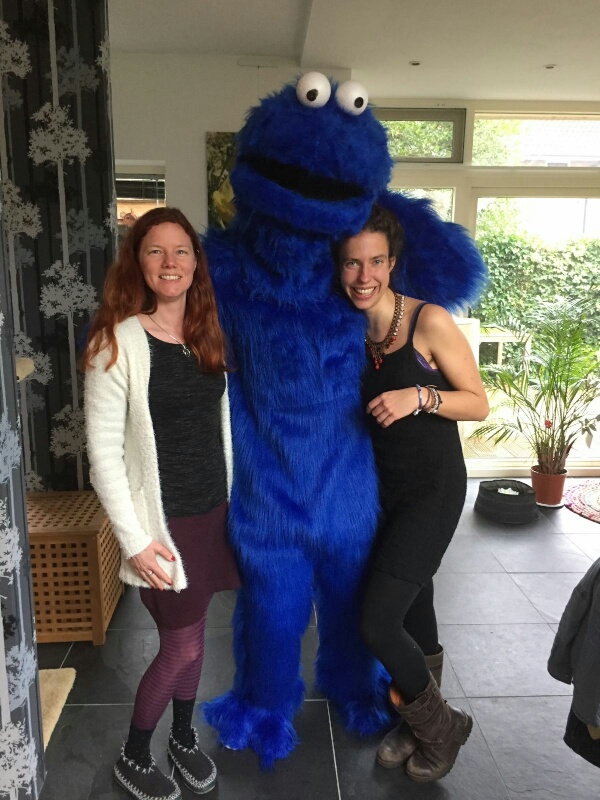